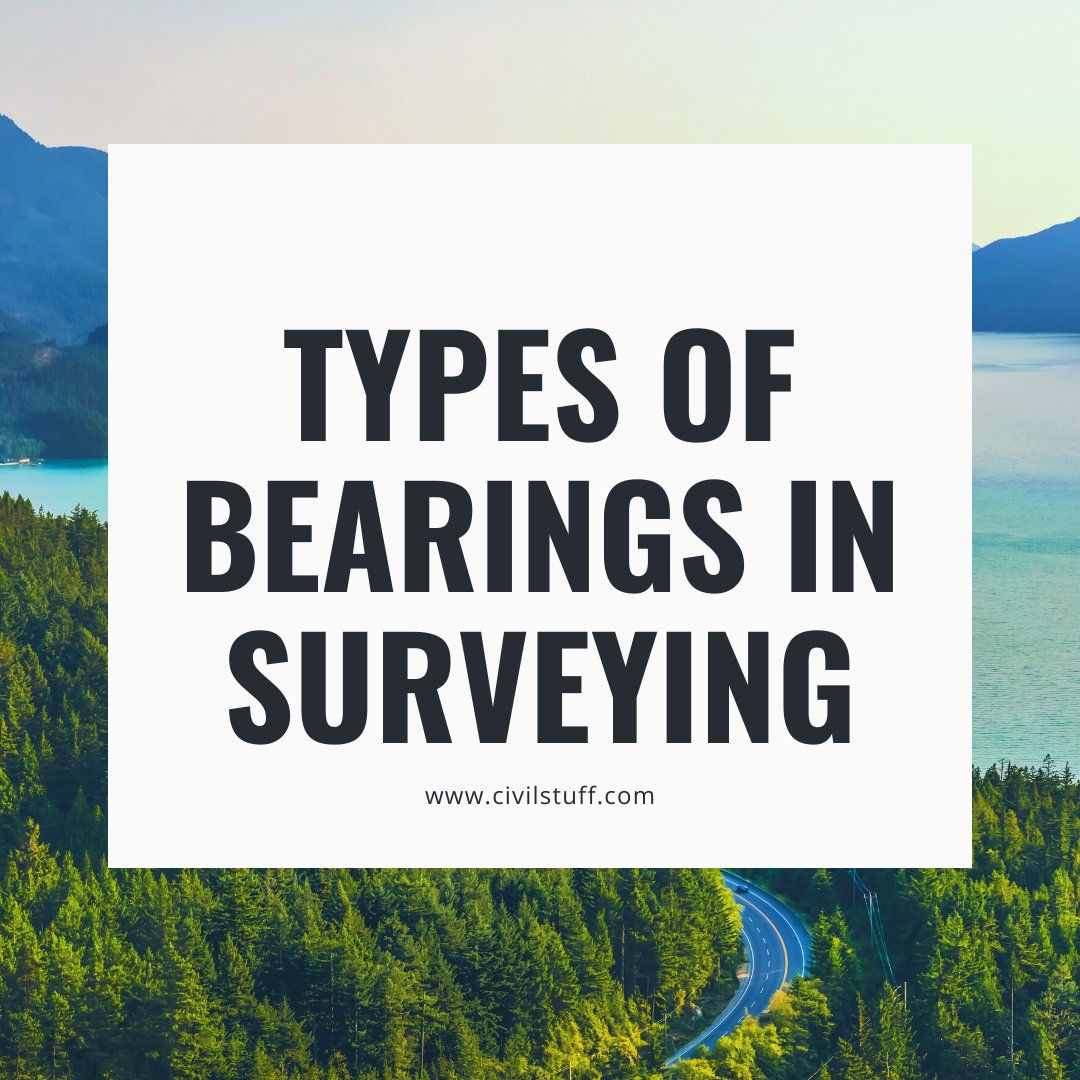 Types of Bearings in Surveying

To understand what bearings are, you need to first understand the other activities that take place during a survey.

During a survey, marks are set at known distances apart and angles to one another in order to accurately lay out the land.

A “bearing” is the angle between two of these marks. You can think of it as an imaginary line that connects two points on earth’s surface (either vertical or horizontal) from which we measure the angle away from true north (+N) or clockwise (-W).

Bearings are most commonly used when measuring slopes or drain lines.

There are four types of bearings,

A line’s bearing is its orientation in relation to a certain meridian. A meridian is any direction, including True meridian, magnetic meridian, and arbitrary meridian.

The magnetic bearing through a point is the direction represented by a freely floating and balanced magnetic needle free of any other attractive forces. A magnetic compass can be used to determine the direction of the magnetic meridian.

Magnetic bearing: A line’s magnetic bearing is the horizontal angle formed by the magnetic meridian passing through one of the line’s extremities. It is measured with a magnetic compass.

An arbitrary meridian is any convenient direction towards a permanent and prominent mark or signals, such as a church spire or the top of a chimney. These meridians are used to identify the relative positions of lines in a small area.

A grid bearing is measured using the direction northwards along the grid lines of the map projection as a reference point. The grid lines are chosen in such a way that they are parallel to the meridians and perpendicular to the parallels.

A line’s grid bearing is its horizontal angle with a grid line running through one of its extremities. The true bearing and magnetic bearing are determined from the grid bearing by subtracting or adding 35° respectively. 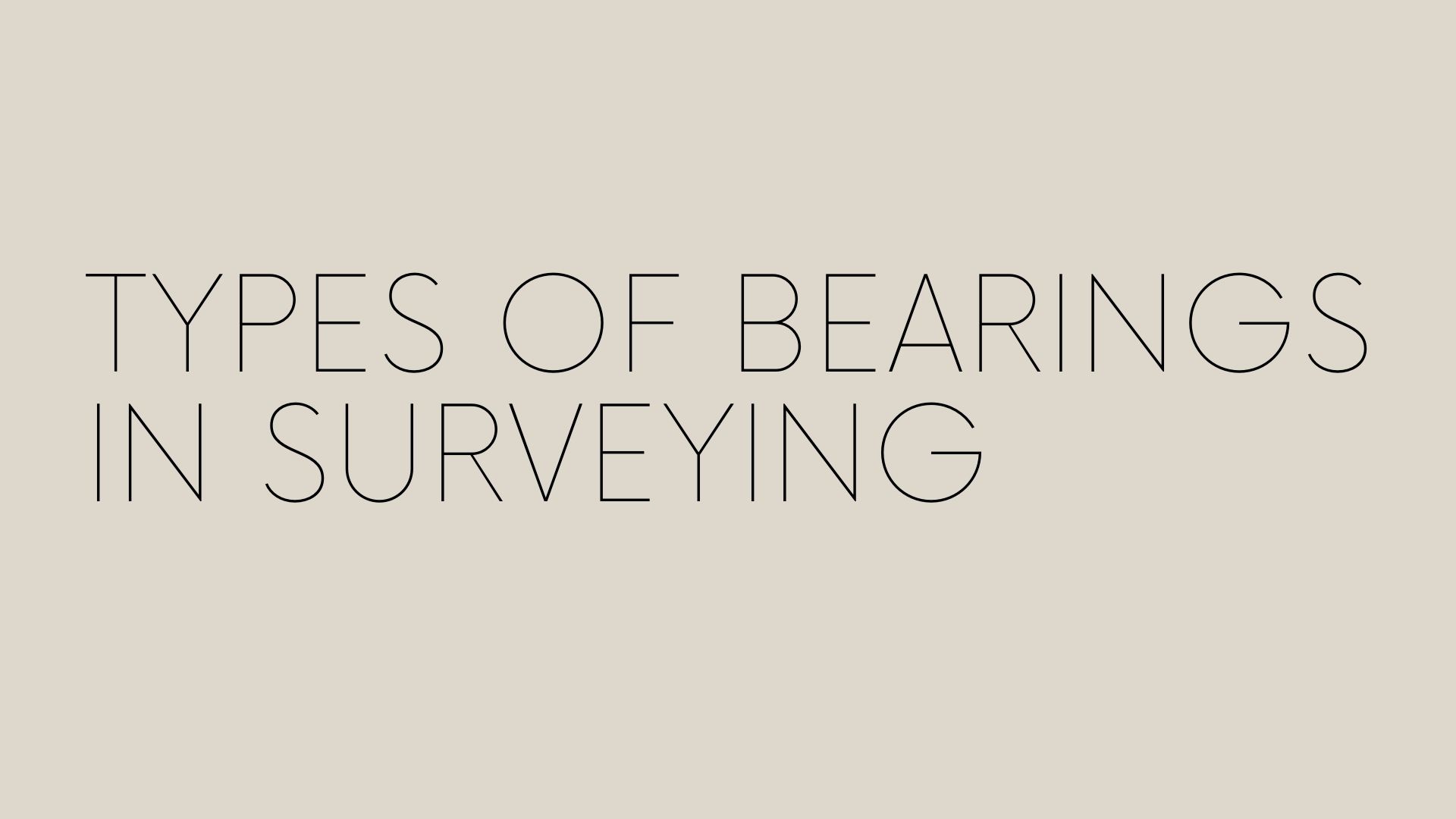 The common bearing designations used in surveying are:

In this system, the bearing of a line is measured clockwise from magnetic north. As a result, the bearing’s value ranges from 0 to 360 degrees. In this method, the Prismatic Compass is graduated.

This method is used to measure a line’s bearing relative to another fixed point or object.

In this approach, a line’s bearing is measured eastward or westward from north or south, depending on which is closest.

Thus, both north and south are used as reference meridians, and the direction can be either clockwise or anticlockwise depending on where the line is located.

In a quadrantal bearing system, the quadrant in which lines are located must be specified. The surveyor’s compass is used to observe these bearings.

The quadrantal bearing system is used when a line’s bearing is measured to one of four points on the periphery of a circle.

For the quadrantal method, four arbitrary meridians are selected with equal distances between them. The true bearings of these meridians are noted on my chain or chain and log.

Forebearing or forward bearing refers to bearings measured while surveying, i.e., in the forward direction of survey lines.

Example: A surveyor places his stake some distance away from a line he is surveying. By sighting the stake against the Celestial body, he can calculate the angle between the two. By measuring that angle and calculating its bearing, he points his instrument in the correct direction of survey.

Forebearing or forward bearing refers to bearings measured while surveying, i.e., in the forward direction of survey lines.

Backward Bearing refers to bearings measured in the opposite direction of surveying progress, i.e., in the backward direction of the survey line.

Calculated bearings are those line bearings that are not measured during surveying progress but are calculated based on other known bearings already taken and/or distances already measured.

Example: This can be used in applying PLS rule 1.5, which states that any two-line segments in a plane have one and only one common perpendicular.

In summary, the four systems of bearings are all of equal use in surveying. The difference between them is more a matter of the method used to determine the bearings than of their accuracy.

The simplified whole circle bearing system is generally easier to use and maintain than the quadrantal system and also less prone to errors.

The former is also suited to instruments with a short radius, e.g., the prismatic compass and the theodolite while the latter is adopted for those with longer radii, e.g. the plane table and Transit Instrument.

The choice of a method of determining line bearings depends mainly on surveyors’ preferences and also on the instruments used for their measurements.

What is bearing and types of bearing in surveying?

Bearing is the simple direction traveled by an object.

There are different types of bearing which are used in surveying such as True, Magnetic and arbitrary

True bearings are used to measure the bearing of a line relative to some fixed point or object.

Magnetic bearings are used to measure the surveyor’s compass direction only, not for map measurements.

What is meridian and bearing?

The meridian is a large circle that travels across true north and true south. Bearing is the direction supplied by the acute angle formed by a line and a meridian.

What is true meridian in surveying?

What is the difference between meridian and longitude?

Longitude is defined as the distance east or west of the prime meridian. Longitude is measured by imaginary lines that go vertically (up and down) around the Earth and meet at the North and South Poles.

These lines are referred to as meridians. Each meridian corresponds to one arc degree of longitude.

What is the difference between true meridian and arbitrary meridian?

Astronomical observation can be used to determine the real meridian as it travels through true north and south. True bearing is the horizontal angle formed by the true meridian and a line.

An arbitrary meridian is any convenient direction towards a well-defined permanent object.

The meridian is not magnetic, but the direction measured along its path is called magnetic bearing. The true north pole and true south pole are located in the north and south magnetic poles.

How are bearings taken?

Bearing can be determined with survey instruments or by using simple tools such as an optical device such as an astrolabe or theodolite. The method of determining the line’s bearing depends on the instrument used.

When taking bearings with instruments, the angle of sight or the pointing direction of a device should be held against the celestial body for observation to determine the true bearing of a line.

The instrument can be moved along a line and its angle adjusted until it is perpendicular to line and when sighted against celestial body, this mean that it is accurately positioned. This setting up procedure is referred to as setting up an instrument for surveying.

What is the shape of meridian?

As a result, the shape of the meridians is circular. Unlike range parallels, which can be circles, longitude meridians are semicircles that intersect at the poles. They form a circle if opposing meridians are taken together, yet they are willing to be closer as meridians separately.

What is azimuth in survey?

Azimuths are horizontal angles measured in the clockwise direction from the reference meridian. Azimuths are sometimes referred to as a whole circle bearing system (W.C.B). Azimuths are commonly employed in compass surveying and plane surveying, where they are measured from the north.

Which is the best definition of the meridian?

Any imaginary semicircle on the earth’s surface extending from the north pole to the south pole. or alternatively: A representation of a meridian on a map or globe that is numbered according to degrees of longitude.

What is true bearing and magnetic bearing?

True bearing and magnetic bearing are terms used in geography to refer to true north and magnetic north, respectively. The direction pointing to the North Pole is known as true north. True north is depicted on a map by meridians or lines of longitude.

Magnetic north, on the other hand, is the direction that points to the magnetic pole.

What is the formula of true bearing?

What is bearing angle?

What is FB and BB in surveying?

What is forward bearing?

What is relative bearing?

What exactly is whole circle bearing?

What is grid bearing?

A horizontal angle measured clockwise with reference to grid north that expresses the direction of an object from a point.

What is square bearing?

Square bore ball bearings are specialized products that have all of the properties of normal Single Row Ball Bearings except that the inner ring has a square interior built for a square shaft rather than a round shaft. These items are also commonly measured in inches rather than metric measurements. 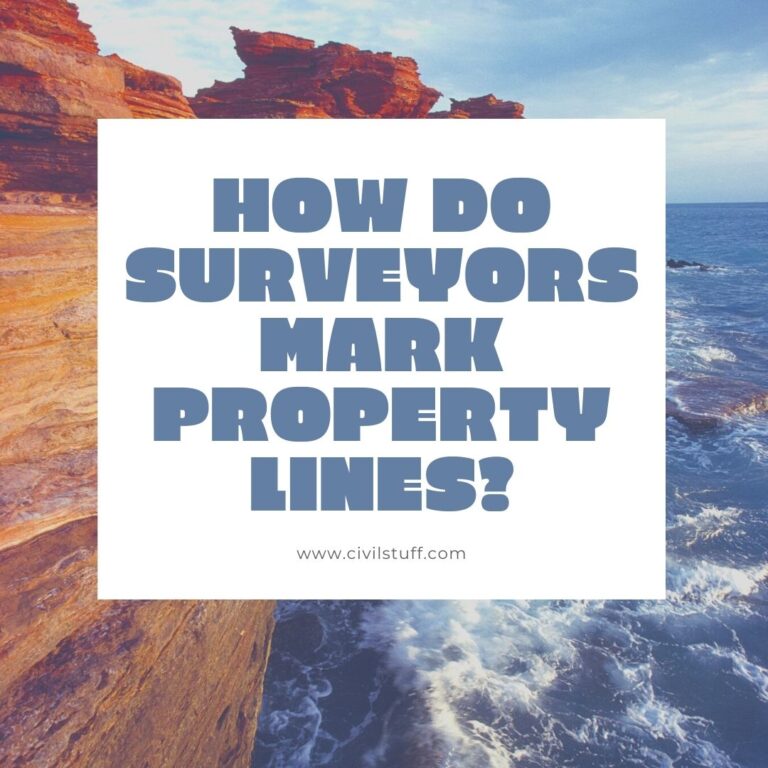 What is Equitable Interest? An equitable interest is defined as “an interest held by virtue of an equitable title… 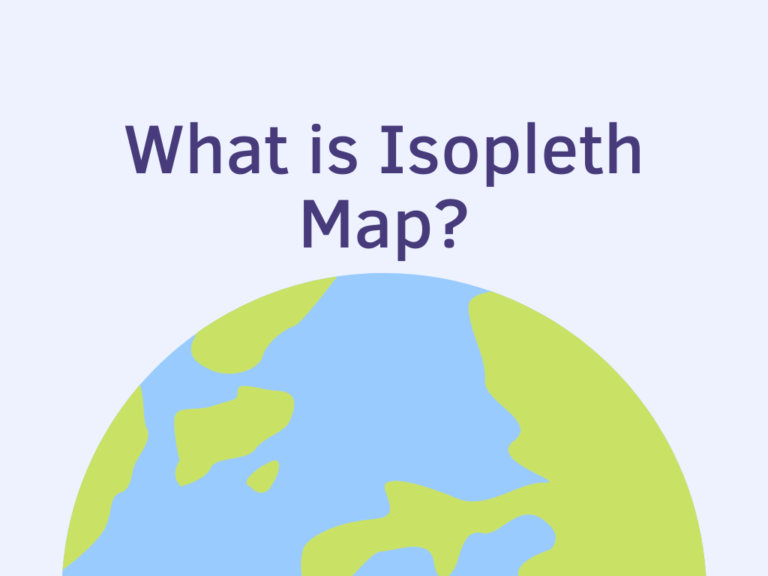 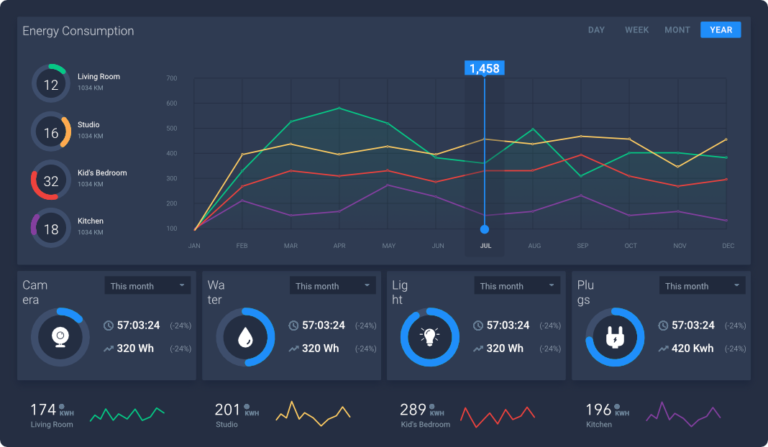