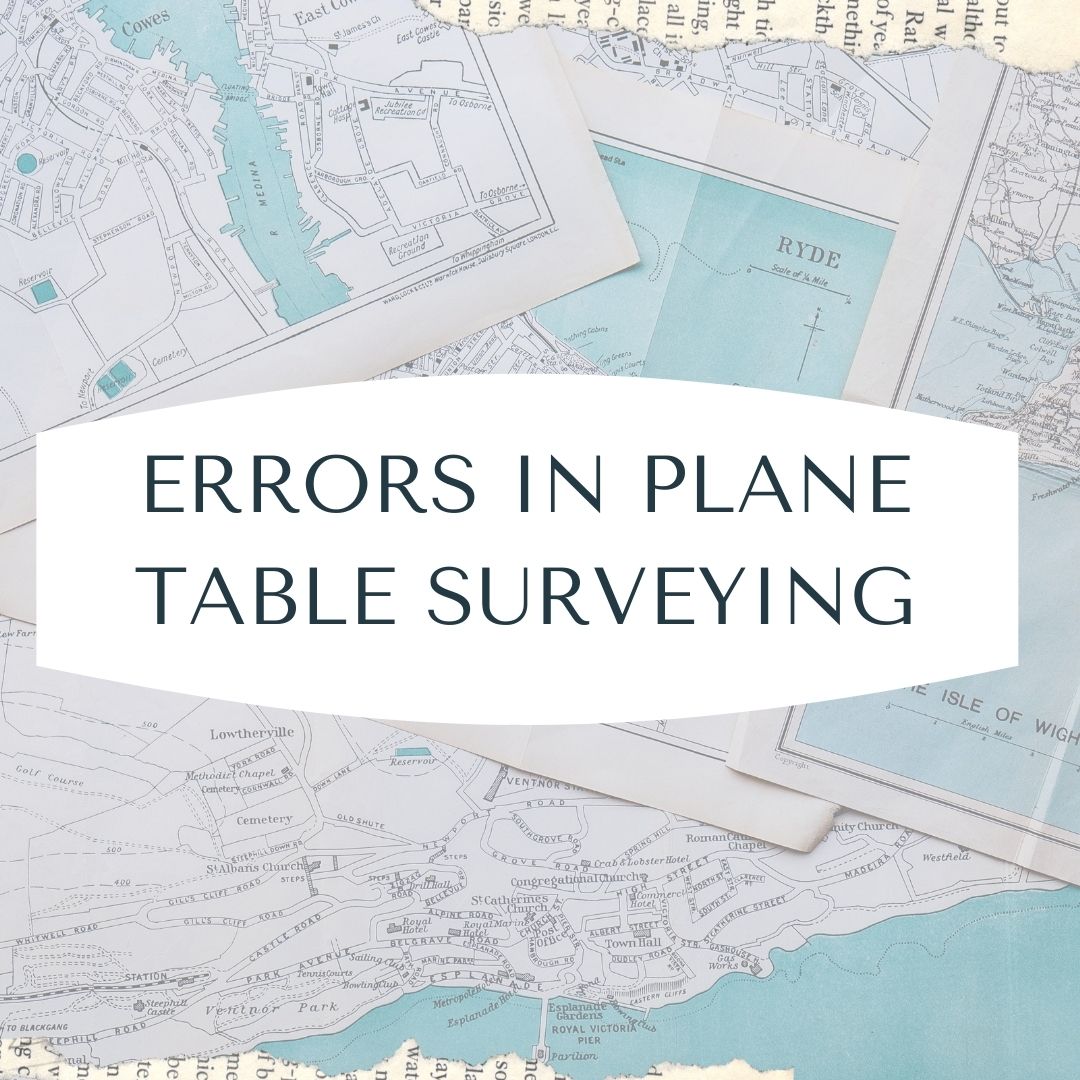 What is plane table surveying

Plane table surveying is a method of surveying that combines plotting and field observations.

Plane table Surveying, often known as plane tabling, is a type of surveying in which fieldwork and office work are completed on a plane table at the same time.

The field observations are taken and recorded side by side on the sheet fixed to the plane table, and a map of the area is obtained. The use of a field-book is completely abolished.

It is best suited for surveying details between stations that have already been set by theodolite or any other exact method of surveying.

It is widely used for small and medium scale mapping of relatively broad areas when high accuracy is not required, such as for topographical surveys.

The basic equipment required for plane tabling is a plane table or drawing board that holds a drawing sheet and is set on a tripod stand, as well as an alidade that gives the line of sight and a straight graduated edge.

There are three sorts of errors in plane table surveying:

Instrumental mistakes are the most common cause of errors in plane table surveying, and they can occur in the following ways:

Errors will arise if the top surface of the plane table is not flat or has undulations.

The tripod and plane table fittings should be securely attached. Loose fittings can make the plane table unstable and create drawing problems.

The magnetic compass used in plane table surveying should reflect exact direction; otherwise, an error may arise due to the plane table’s incorrect alignment.

An error in the drawing occurs when the alidade’s beveled edge or fiducial edge is not straight or curved.

Both the sight vane and the object vane of an alidade should be perpendicular to the base of the alidade; otherwise, sighting will be incorrect.

Faulty Because a spirit level or level tube may not keep the plane table horizontal, an error may arise.

Errors can occur when plotting for a variety of reasons, including: the use of a low-quality drawing sheet, which may influence the scale of the drawing. It is caused by the expansion and contraction of drawing paper in response to temperature fluctuations. Weather changes will not cause a well-seasoned drawing sheet to expand or compress.

The nose of the pencil used for plotting should be slender and pointed. The use of a thick pencil may cause the scale of the drawing to change, especially in the case of very small-scale drawings.

In summary, plotting errors can occur as a result of:

Manipulation and sighting errors are examples of human or man-made errors. They can occur as a result of any of the following scenarios:

The plane table should be secured to a tripod in such a way that it does not move while sketching or changing locations. Errors are caused by incorrect clamping.

When viewing objects, the sight vane should always be in a vertical position. The plane must be precisely leveled in order for the sight vane to be vertical. Improper leveling may result in an inclination of the sight vane with the vertical axis, resulting in mistakes in plane table surveying.

The centering mistake arises when the plane table is not perfectly above the ground point. As a result, careful centering with a plumbing fork is required.

When there are many instrument stations, the orientation of the plane table is required. Improper orientation causes mistakes in the angular position of points.

Improper seeing through vanes produces mistakes in object direction. As a result, the sighting should be done in such a way that the object is bisected exactly in the middle.

Improper seeing through vanes produces mistakes in object direction. As a result, the sighting should be done in such a way that the object is bisected exactly in the middle.

They can generally be categorized to:

The effect of the board’s non-horizontality is more severe when the difference in elevation between the spots sighted is greater.

The precision with which points are viewed has a considerable impact on the accuracy of a plane table mapping. In terms of line-of-sight definition, the plain alidade with open sight is far inferior than the telescopic alidade.

Orientation with a compass is unreliable because there is always the chance of a local attraction. The distortion of the poll is exacerbated by incorrect orientation. The orientation should be confirmed at as many stations as feasible by observing distant notable objects that have already been plotted.

Because of the observer’s carelessness, the table may be disrupted between any two sights, resulting in the disturbance orientation.

To reduce the probability of such movement, the clamp should be tightly tightened. It is always a good idea to double-check the orientation at the end of an observation from a station.

It is critical to have a thorough understanding of the magnitude of error generated by faulty centering in order to avoid wasting time setting up the table through numerous trials.

When using the plane table, the following precautions should be taken:

This is the alidade’s optimal location and should always be desired.)

Despite the precautions taken, human errors can always occur. Therefore, it is imperative to take precautions in order to avoid mistakes. In this regard, the three major types of mistakes are mathematical, measurement and manipulation errors.

For example, if a small error is made with a measurement during surveying and then multiplied by an unknown factor in calculating, an erroneous result will be obtained for determining a distance between two points or determining the angle between two rays.

Conversely, if an error is made during operations using an instrument, the corresponding error may be obtained through mathematical calculations.

To avoid such errors, it is essential to double-check all mathematical computations. Measurement errors can be reduced by holding the instrument firmly, monitoring the instrument’s condition and solutions at designated stations and maintaining a high standard of professionalism in conducting survey operations.

After every operation, there are always leftover objects on the table. The plane table should be cleaned before the next operation in order to avoid any confusion as a result of objects left over from previous operations.

The importance of the surveyor’s professionalism cannot be stressed enough.

What are the errors of the plane table surveying?

There are three sorts of errors in plane table surveying: Errors in instrumentation Plotting mistakes Errors as a result of modification and sighting.

What are the limitations and errors in plane table survey?

What are the errors occurred in radiation method?

What are the likely errors in intersection method?

The table on which the lines must be drawn must be precisely set. If the table is not properly set, it must be adjusted to a balanced surface. The instruments should be fixed and should not be able to move freely.

Which instrument is not used in plane table survey?

A compass is used to determine magnetic north. Theodolite is not employed in this situation because the entire operation is performed manually without the use of any instruments.

What are advantages of plane table survey?

Which of the following error comes under personal errors?

Which error comes under instrument errors?

What are the probable errors in plane table survey?

Error of angle measurement is very important in plane table survey. If rays are not drawn correctly it may lead to serious errors.

If a ray is parallel with the observed range line, then their intersection will give two lines at right angles. Error of distance measurements and calculation are also important in plane table survey.

What is 3-point problem in surveying?

A surveying technique that uses three plumb lines suspended in a vertical shaft to orient subsurface workings. ii. In plane table surveying, the challenge of exactly determining the position at which the table is set up, utilizing three fixed points visible from the plane table.

What is two-point problem in surveying?

Two-point problems: Locate the position on the plan, of the plane table’s station, using observations to two well-defined points whose positions had previously been mapped on the plan.

How is personal error minimized?

Personal errors cannot be completely eradicated, but they can be decreased by good training and the implementation of automated analytic tools. A larger sample size and a greater number of observations also aid in the minimization of such mistakes.

Where are plane table surveys used?

It is used to locate topographic details by running survey lines between stations that have already been fixed by other methods of survey.

From there, a line of sight is drawn toward B, and the distance AB is measured. The plane table is moved to station B and aimed at A. (this is called back sighting).

What causes systematic error in surveying?

Systematic errors are induced by surveying equipment, observation methodologies, and environmental conditions. These errors will have the same magnitude and direction under identical measurement conditions (positive or negative).

What is error correction?

Which of the following errors cannot be minimized?

If the problem is identified as a plotting error, the only option is to re-survey. It is difficult to recreate a map to a different scale in plane table surveying.

What is Equitable Interest? An equitable interest is defined as “an interest held by virtue of an equitable title…

How Much Does 1 Acre Of Land Cost In Tennessee? Tennessee’s average acre of land is worth $14,400, but…