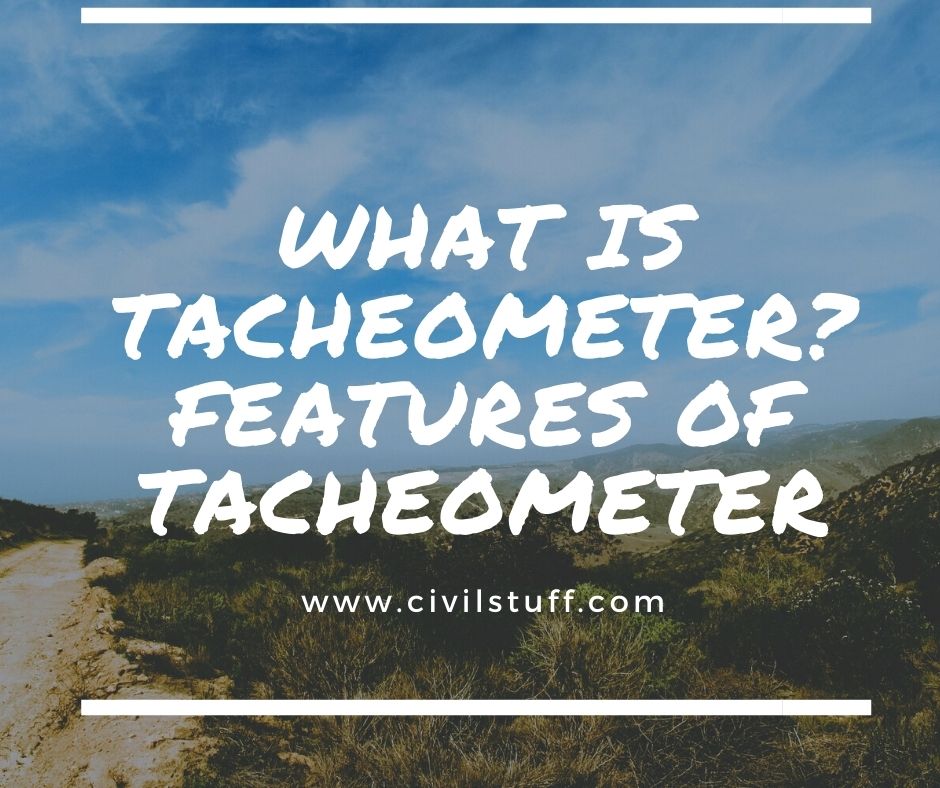 A tacheometer is a transit theodolite with a unique stadia diaphragm. It is the primary tool used in tacheometric surveying.

The tacheometer is an instrument that enables one to measure horizontal distances by using a telescope with a magnifying lens.

In addition to the standard crosshairs, its telescope has two horizontal hairs called stadia hairs. Stadia hairs are equidistant from the central cross-hairs and are known as stadia lines or stadia webs. The following are the most prevalent types of stadia diaphragms:

The tacheometer’s telescope comprises two horizontal hairs called stadia hairs and notably referred to as stadia lines that are equidistant from the center cross-hairs.

Additional requirements, such as accuracy, speed, and more refined vertical circles, must be met by the telescope equipped with a tachometer. The tacheometer’s telescope has a greater magnification power.

The tacheometer’s lens system is of higher quality, the object-glass is larger in diameter, and the magnification power should be between 20 and 25.

For a bright image, the effective aperture should be no smaller than 3.5 cm to 4.5 cm in diameter, and the instrument of the multiplication constant should be set to 100.

This is used for close sights, and the eyepiece is moved in the vertical plane by rack and pinion. The top and bottom hairs are read, and combinations can be made. Direct readings on the vertical circle should be achievable up to a 5-degree angle.

A tacheometer must fundamentally include the following features:

There are numerous techniques of tacheometer survey based on the idea, such as the

There are primarily two systems for surveying in-stadia systems, which are as follows:

The apparatus for taking observations in the fixed hair method of the tacheometer survey consists of a telescope with two additional horizontal crosshairs, one below the center hair and one above the central hair.

These are known as stadia hairs because they are placed equidistantly from the central hair.

When the staff is examined through the telescope, the stadia hairs are observed to intercept a particular length of the staff, and this varies directly with the distance between the instrument and the stations.

Because the spacing between the stadia hair is fixed, this method is known as the fixed hair method.

In this method, the device used for taking observations is a telescope furnished with stadia hairs that can be moved and set at any distance from the central hair.

The staff employed with this instrument consists of two targets at a set distance, and at stadia intervals, the different positions of the staff are measured, and the horizontal distance from the instrument station to the staff station is computed.

To establish the horizontal distance and difference in elevation between the line of collimation and the staff station in this tacheometer survey system, two observations from the staff station to the instrument station will be required.

This approach can be performed using a standard transit theodolite, but it is regarded inferior to the stadia system used today for the following reasons.

Errors and Precautions in The Tacheometer

Instrumental errors can occur as a result of manipulation and sighting, natural causes, faulty permanent adjustments in the instrument, and inaccurate graduations on the stadia rod.

These errors are dependent on the surveyor’s efficiency and competence, and they may occur as a result of poor leveling and centering of the instrument, resulting in wrong stadia readings.

Natural errors can occur as a result of wind, unequal expansion of instrument parts, asymmetrical refraction, and visibility.

Although tacheometer and theodolite both use a horizontal circle and stadia rod, they are fundamentally different in their approach to stadia readings.

The horizontal circle of the transit instrument is a device that enables one to measure an angle by rotating an arm with a telescope attached to it.

This line connects the observer’s eye to the object through which the angle is being measured.

This angle can vary from 0 to 360 degrees, and the stadia rod is photographed at each reading point. Therefore, the horizontal distance between two points can be read on the horizontal circle.

The tacheometer is an instrument that enables one to measure horizontal distances by using a telescope with a magnifying lens.

Two readings are taken in the fixed or moveable hair method of tacheometer survey, and these readings must be calibrated to determine the horizontal distance between two stations.

It is one of the fastest methods of surveying. The accuracy of tacheometric surveying in uneven or difficult terrain is quite satisfactory. Does not require any tedious jobs with tapes and chains.

What are the advantages of Tacheometer?

Some of the shortcomings are:

However, despite of these few short-comings tacheometer is still one of the most efficient measuring tools for surveying.

Tacheometer is not just an effective surveying method, but also it is a great instrument for making accurate measurements in many fields.

Tacheometer can be applied for measuring distances in space as well as land surfaces. It also can be used in making very accurate measurements, and it provides a wide range of measurement equipment.

It is also a great tool for surveying applications in different fields such as land, river, and marine.

A tacheometer is a sort of theodolite that determines the distance to target electronically or electro-optically and is highly automated in its functioning.

What is the principle of tacheometer?

The idea of tacheometry is based on the property of isosceles triangles, which states that the ratio of the distance of the base from the apex to the length of the base is always constant.

What are the various uses of Tacheometric surveying?

Tachometry is used for topographic map preparation where both horizontal and vertical distances must be determined; survey work in challenging terrain where direct techniques of measuring are inconvenient; a reconnaissance survey for highways and railways, for example; Secondary control points must be established.

What are the advantages of holding staff vertical in Tacheometric surveying?

A tacheometer’s vertical circle is often more refined than that of a regular theodolite. In addition, the telescope used in a tacheometer is longer and has a higher magnification power. The fitted object-glass has a larger diameter as well. The instrument’s multiplication constant is commonly assumed to be 100.

What are the advantages of Tacheometric survey?

The following are the advantages of tacheometric surveying over the direct method of measuring horizontal distances and elevation differences:

What are the disadvantages of tacheometer?

However, despite of these few short-comings tacheometer is still one of the most efficient measuring tools for surveying.

How are cross hairs placed in a tacheometer?

The apparatus used for taking observations in the fixed hair method of tacheometric surveying consists of a telescope fitted with two additional horizontal cross hairs, one above and one below the central hair.

Tacheometric constants are the stadia interval factor (K) and the stadia constant (C). These constants must be determined before utilizing a tacheometer for surveying operations. The following approach can be used to compute these using field observations.

What are the merits and demerits of movable hair method?

The advantage of the movable hair approach is that it is more accurate than the stadia method because only targets are to be bisected. One downside is that it takes longer in the field for observation and distance computation.

What are the objects of tacheometry?

The fundamental goal of tacheometry is to create countered plans. It is thought to be fast and precise on rugged terrain, thus engineers have used it extensively in location surveys for railways, canals, reservoirs, and so on.

Tacheometry improves the precision of distance measurements made with a tape or chain.

What is tangential method of tacheometry?

When there are no stadia hairs in the instrument’s diaphragm or when the staff is too far away to read, the tangential method of tacheometry is used. In this system, the sighted staff is outfitted with two large targets (or vanes) placed at fixed vertical distances.

How many stadia hairs are provided in diaphragm of tacheometer?

How do you find the constant of a tacheometer?

What are essential requirements of a tacheometer?

A tacheometer must essentially include the following features: the multiplication constant must have a notional value of 100 and the error in this value must not exceed 1 in 1000. The axial horizontal line should be located exactly in the middle of the other two lines.

What are the methods of tacheometry?

In this system, the sighted staff is outfitted with two large targets (or vanes) placed at fixed vertical distances.

Which instrument is used for tacheometry survey?

The tacheometer is the instrument used in tacheometry. The horizontal distance is measured optically or electronically (electro-optically), and the horizontal angle is calculated numerically or visually.