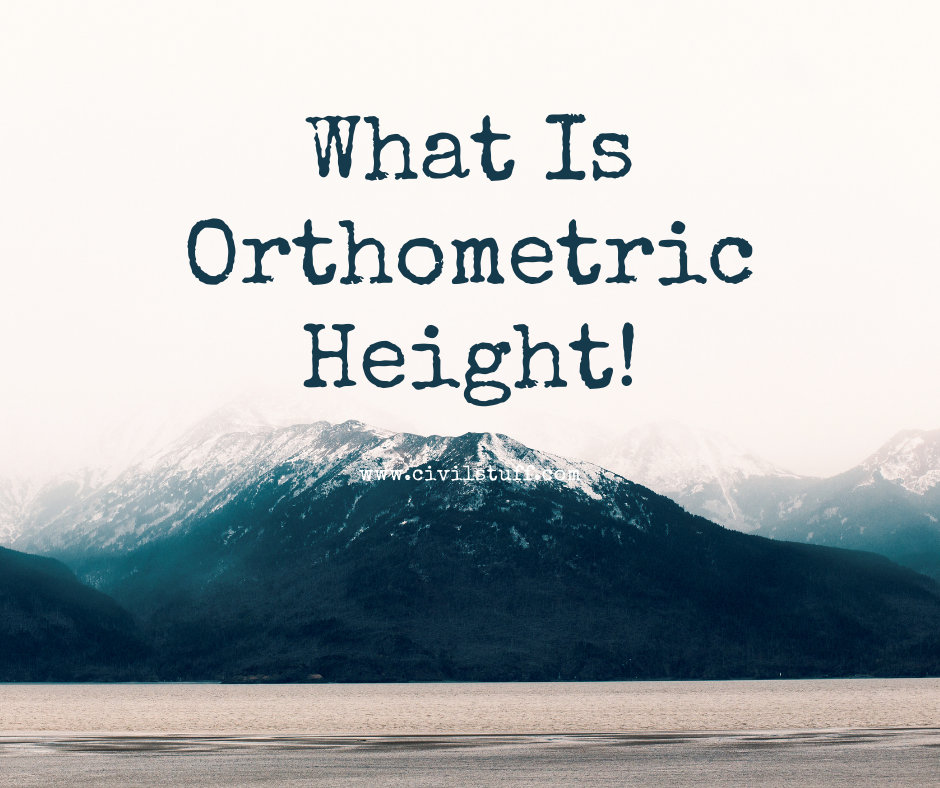 What Is Orthometric Height?

What Is Orthometric Height?

The orthometric height is the vertical distance H along the plumb line from a place of interest to the geoid, the vertical datum that approximates mean sea level.

Orthometric height, along with other sorts of heights in Geodesy, is one of the scientific formalizations of a layperson’s “height above sea level.”

The current NAVD88 datum in the United States is related to a specific elevation at one point rather than to the exact mean sea level of any location.

In the United States, orthometric heights are mostly employed for engineering work, however dynamic heights may be used for large-scale hydrological applications.

The heights of measured points are displayed on National Geodetic Survey data sheets, which were compiled over many decades by exact spirit leveling over thousands of miles.

Dynamic height and normal height are alternatives to orthometric height, and different countries may choose to use those definitions instead of orthometric.

They may also use somewhat different but related definitions of their reference surface.

Because gravity is 0.1 percent stronger in the north than in the south, a level surface with an orthometric height of 1000 meters in Montana will be 1001 meters high in Texas.

Because the geoid resides below most of the land surface, practical applications must rely on models rather than measurements to compute the change in gravitational potential vs depth in the earth (e.g., the Helmert Orthometric heights of NAVD88).

GPS measurements provide earth-centered coordinates, which are often reported as height above the reference ellipsoid and cannot be reliably linked to an orthometric height above the geoid in the absence of appropriate gravity data for that site.

In the United States, the NGS has launched the GRAV-D ten-year effort to collect such data, with the intention of providing a new definition in 2022. 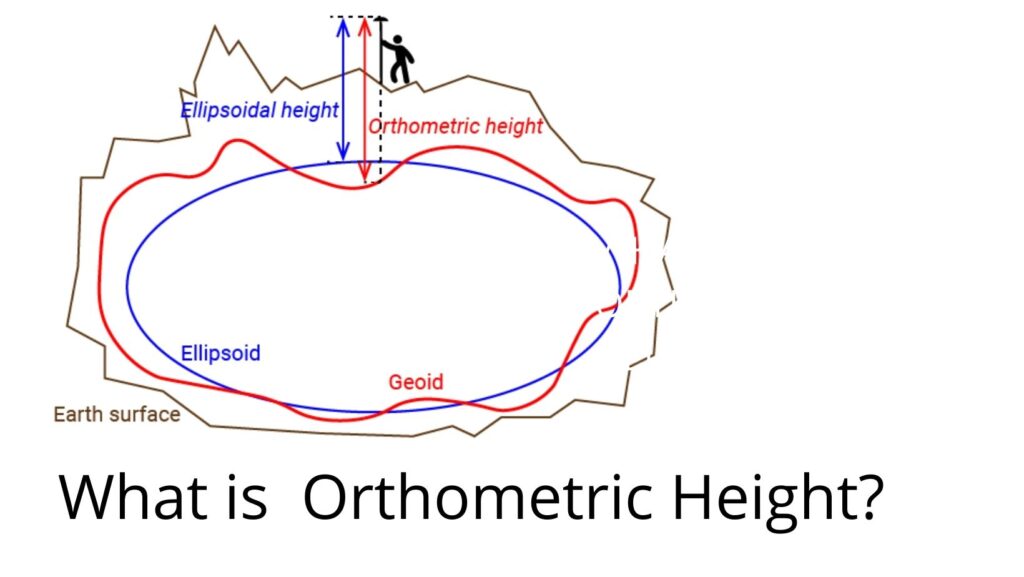 Whereas it is common to see map or elevation data with the logarithm of the difference between orthometric height and mean sea level as a numerical value, this only approximates the exact vertical distance between points on a horizontal surface.

MSL is defined as the local area’s zero elevation. A vertical datum is the zero surface that is referred by elevation. Unfortunately for cartographers, sea level is not a flat surface.

MSL features small hills and valleys that are similar to the land surface but smoother since the sea surface conforms to the earth’s gravitational field.

The accuracy of GPS height measurements is determined by various factors, the most important of which is the “imperfection” of the earth’s shape. There are two methods for measuring height. Height (h) above the reference ellipsoid that approximates the earth’s surface is used by GPS.

The classical orthometric height (H) is the height above an imaginary surface known as the geoid, which is governed by gravity and approximated by MSL.

The geoid is defined as the 3D surface created by the gravitational attraction between all points on the ellipsoid.

The difference does not need to be positive since the earth’s crust will sink below sea level over time.

The distance Ho from the point to the geoid is the orthometric (geoid) height of a point on the Earth’s surface.

The difference between the ellipsoidal height and the orthometric (geoid) height is the geoid height above the ellipsoid (N).

The following concepts are explained in the plainest words.

The vertical distance between the GNSS antenna and the surface of the rugby ball is measured in ellipsoidal height.

Advantages: the ellipsoid model is quite simple, and many GNSS receivers use it.

The vertical distance between the GNSS antenna and this high-quality surface is measured in orthometric height (geoid).

The measured height represents the height above mean sea level, which is advantageous.

Disadvantages: high quality models are big in size; often, these models are saved in smartphone/computer programs rather than directly in the GNSS receiver.

To reduce their size, several of these high-quality models are local (rather than global).

Geoid height: For a particular location, it is calculated as the height difference between the high-definition model (geoid) and the rugby ball (ellipsoid).

Distinction between ellipsoidal and orthometric elevations

When two persons refer to the same spot, why do they get different elevations? How is that possible? This mistake is frequently explained by the fact that both people measured the point’s elevation in relation to a different elevation reference (or vertical datum).

The backdrop is explained in more depth below.

The orthometric height, also known as the geodetic height, is the vertical distance from a point on the Earth’s surface to the geoid (blue surface in the illustration). Because the earth geoid is fixed at the average sea level, it is often referred to as the elevation at Mean Sea Level (MSL).

The Ellipsoidal Height of that same place on the Earth’s Surface is the vertical distance from that point to the ellipsoid (ochre surface in the illustration).

Vertical datum at the local level

In the world, there are numerous implementations of local vertical datums. They are parallel to the geoid but displaced vertically by a few meters. This offset is caused by local phenomena such as ocean currents, tides, coastal winds, water temperature, and salinity at the tide-gauge position.

When working on initiatives that straddle international borders, this frequently causes misunderstanding. Because height is measured with regard to a particular local vertical datum, elevation numbers on different maps may differ.

Where should the vertical datum be set?

The right elevation reference level (datum) must be set in your photogrammetry process.

The orthometric height (also known as geodetic height) is defined as the distance above MSL. It is often referred to as the height above mean sea level (MSL).

In practice, it is not possible to measure orthometric heights directly on the earth’s surface, because the earth’s crust sinks below sea level.

As a consequence, measurements must be made on altitudes above MSL that are indicated by a survey benchmark. These measurements are referred to as benchmarked orthometric heights.

To give an example, a point that is located 1 m above MSL (or the geoid) on a bench mark, will result in an orthometric height of 0.99 m.

Orthometric heights are useful when measuring positions of points that have been surveyed and are indicated by survey measurements.

The method for calculating orthometric heights is different depending on whether or not you also need to know the horizontal distance between your point and the surveyed spot, which is called the horizontal position.

In this method, you will only need the orthometric height and know the horizontal distance between your point and the surveyed spot. To calculate the corresponding horizontal position, you can use one of two methods.

When calculating the horizontal position, you have to know the orthometric height.

The orthometric height is the vertical distance H along the plumb line from a place of interest to the geoid, the vertical datum that approximates mean sea level.

What is orthometric height in surveying?

The orthometric height, also known as geodetic height, is the vertical distance from a point on the Earth’s surface to the geoid (blue surface in the illustration). Because the earth geoid is fixed at the average sea level, it is commonly referred to as the elevation at Mean Sea Level (MSL).

How do you measure orthometric height?

The vertical datum can be set in a number of ways. The most common are relative to sea level, survey bench marks and natural terrestrial benchmarks (such as the highest or lowest points within a survey control network).

Where should the vertical datum be set?

Orthometric heights must be computed with reference to a known vertical datum. In the Netherlands, this is NAP (Nieuw Amsterdams Peil).

What is the difference between orthometric height and ellipsoid height?

The distance along the plumb line from the reference surface (Geoid) to the location determines the orthometric height. Ellipsoid – a smooth mathematical surface that looks like a squashed sphere and is used to represent the Earth’s surface.

Why is orthometric height important?

In the United States, orthometric heights are mostly employed for engineering work, however dynamic heights may be used for large-scale hydrological applications.

The heights of measured points are displayed on National Geodetic Survey data sheets, which were compiled over many decades by exact spirit leveling over thousands of miles.

What is Geoidal separation?

Geoidal separation refers to the vertical distance between the actual Earth’s surface and the surface of the Earth’s model.

How do you calculate ellipsoidal height?

Add the orthometric height and geoid height to determine the ellipsoidal height for a given latitude and longitude: h = H + N. The egm96geoid function returns the height of the geoid from EGM96 at specified latitudes and longitudes.

What is GNSS Orthometric?

What is the difference between MSL and HAE?

The difference between HAE and MSL is referred to as the geoid separation or geoid height, and globe maps of that separation can be discovered by browsing the web.

These changes in MSL from the ellipsoid surface are caused by variations in the density of the earth’s crust and mantle, which impact gravity locally.

What is normal height in geodesy?

What is navd88 based on?

What is an ellipsoid GIS?

An ellipsoid is a higher-dimensional equivalent of an ellipse that is a form of quadric surface. It is comparable to a sphere except that the radii along one axis are longer than the radii along the other.

What do you mean by geodesy?

Geodesy is the science of precisely measuring and comprehending the geometric shape, orientation in space, and gravity field of the Earth.

Geodesists assign coordinates (equivalent to a unique address) to places on the Earth’s surface in order to measure them.

What is the difference between datum and ellipsoid?

The ellipsoid, unlike the geoid, assumes that the Earth’s surface is smooth. This disparity is referred to as the “geoid height.” Because the ellipsoid is only a baseline for measuring topographic elevation, the variations between it and the geoid can be significant.

What is helmert height?

In Japan, the local vertical datum is based on Helmert’s approximation of mean gravity along the plumbline. Helmert orthometric height corrections range from 30.9 cm to 0.0 cm, with a mean value of 0.4 cm and a standard deviation of 1.7 cm.

A more precise vertical datum (NAVD88) was established as the national standard in 1988. NAVD88 is a reference to the Mean Sea Level at one tidal station in Rimouski, Quebec, located near Father Point. Local MSL in meters relative to NAVD88 (GEOID12A).

Plane Table Surveying with Methods and Examples | Advantages & Disadvantages What is Plane Surveying? Plane surveying is a…

Difference Between Plane and Geodetic Surveying Introduction Surveying is simply the technique or technology of making scientific measurements on,…