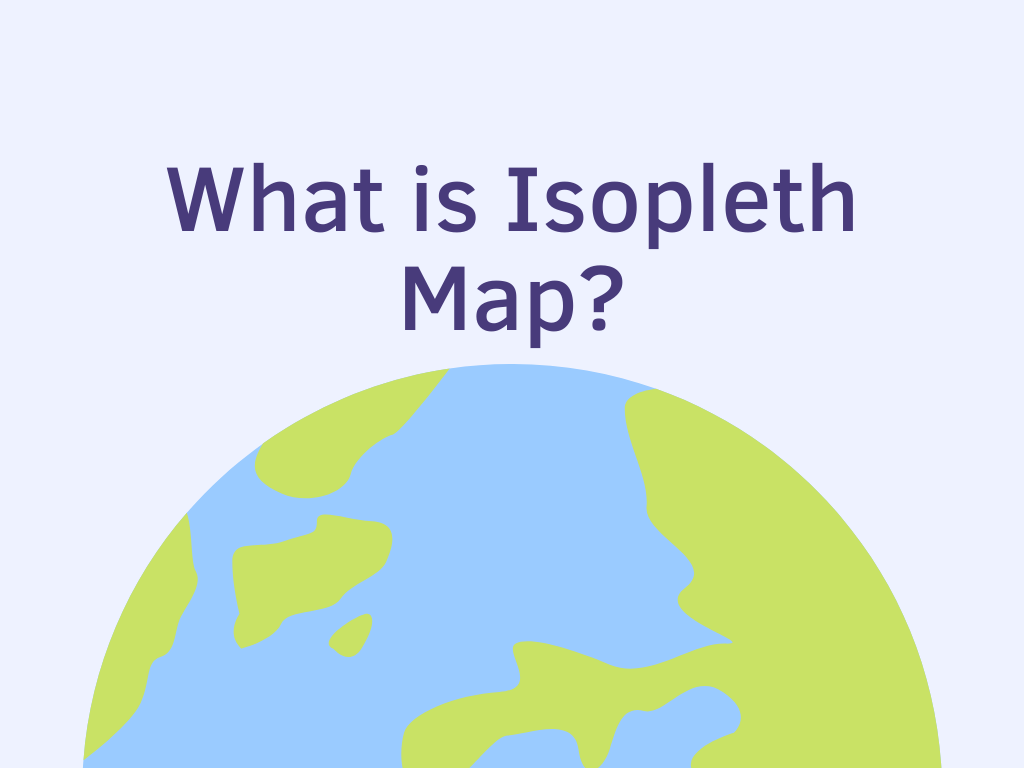 An Isopleth map is a map that employs lines or colors to identify places with comparable regional characteristics. Isopleth maps condense information about a region by displaying areas with a continuous distribution.

Lines on isopleth maps can be used to show areas with the same elevation, temperature, rainfall, or other characteristic; values between lines can be interpolated.

Color may also be used in isopleths to depict regions where some quality is the same; for example, a map that uses colors ranging from red to blue to indicate temperature ranges.

An isopleth varies from a choropleth in that its lines or regions are established by data rather than by a designated territory, such as a political unit.

This sort of map is good for demonstrating progressive development over time and avoids the sudden shifts produced by boundary lines on choropleth maps.

Temperature, for example, is a phenomenon that should be mapped using isoplething since it exists at every place (is continuous), yet it does not change abruptly at any point (like population density may do as you cross into another census zone).

For this reason, relief maps should always be in isopleth form.

These maps can be of two types:

We need a base map of the area with point data to create isopleth maps (showing values). All of the points for which data is available must be plotted on the map.

The isohyete method uses lines or patterns to represent areas having a common value. The basis for isohyet is to draw a line around each area of identical value that can be seen on your map.

This line divides each region into two halves: one higher than the line and one lower than it.

The highest and lowest points of value are marked on the map, with points between them determined by interpolation.

The isopleth method provides a way to compare variants of one topic, such as average earnings within an industry. This can be done by plotting points that are worth the same amount and identifying the values of these points.

Isopleth maps are used in a variety of fields to demonstrate value equality. The applications of Isoline map are as follows.

and depth in land.

Choosing the Interval of Isopleth

Choosing an Isopleth Interval Isopleths are drawn at a defined interval, i.e., the interval between all Isopleth lines should be the same.

The location of an isopleth on a map reveals the gradient, i.e., if the isopleths on a map are close to one another, the gradient is steep.

When the isopleths are far apart, on the other hand, the gradient is gentle. As a result, the isopleth interval should be chosen with care.

Rules to follow while deciding on an isopleth interval

An isoline on a graph depicting the occurrence or frequency of a phenomenon as a function of two factors. Or a line on a map linking sites where a given variable has a constant value.

What is an isoline on a map?

Isolines are lines drawn on a map that connect data points of the same value. Contour lines, for example, depict relief and connect locations on a map that are the same height.

Isobars, on the other hand, show pressure bands of high and low pressure and connect points with the same atmospheric pressure.

What is the most common Isoline map?

An isoline drawn between points with the same elevation above sea level is a contour line, which you see on maps all the time and is the one you’d have to utilize the most.

Another type of isoline is an isobar, which connects locations with the same atmospheric pressure as depicted on weather maps.

Which places are joined by the lines used in the isopleth maps?

Isopleths are lines painted on weather maps to denote lines of equal air pressure (isobars) and equal temperature (isotherms). Isobaths are lines that connect places of equal depth in lakes and oceans.

Is isopleth and isoline the same?

What is an isoline example?

A constant-value line on a map or graphic. Isobar (equal barometric pressure), isotherm (equal temperature), and isohyet are some examples (equal precipitation).

What does ISO mean in geography?

Because the prefix ‘iso’ is derived from the Greek word for equal, an isoline must be a line connecting equal locations.

How do you make an isopleth map?

Join point A of 10°C temperature with point B of 4°C temperature for this aim. Divide the line AB into 10 – 4 = 6 equal segments and count five divisions from A or one division from B to get the point with a temperature of 5°C.

A curving line connects all three sites with temperatures of 5°C.

Is a topographic map an isoline map?

What is isopleth phase diagram?

What is interval between each isopleth?

Isopleths are drawn at a constant interval, i.e., the interval between all Isopleth lines should be the same.