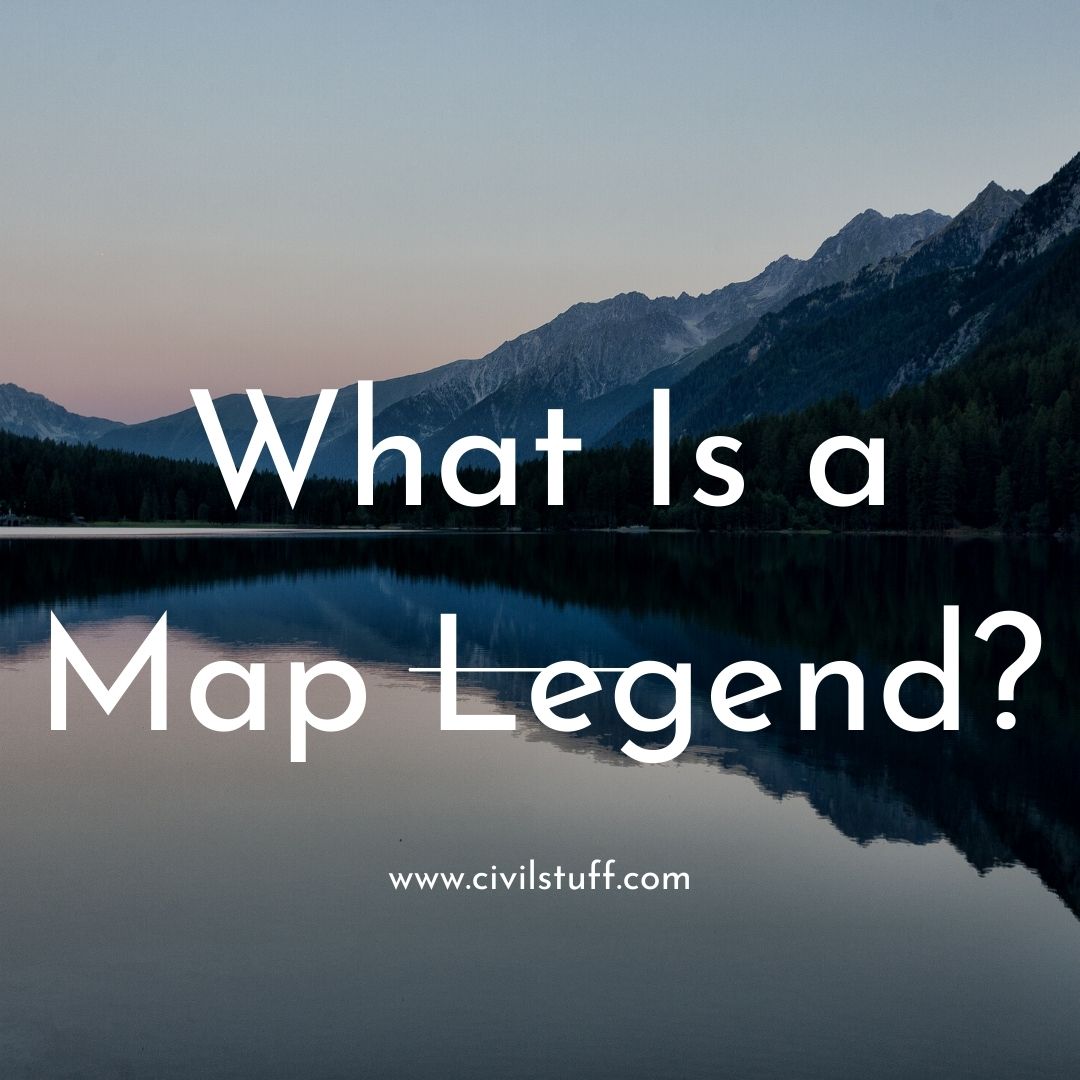 What Is a Map Legend?

A map legend, often known as a key, is a visual explanation of the symbols on the map. It usually includes a sample of each sign (point, line, or area) as well as a brief explanation of what the symbol means.

A brief section of a blue sinuous line, for example, could be labeled ‘rivers.’ Because the meanings of map symbols vary by region, a clear and short legend is essential for explaining the map’s distinguishing features.

The legend is a graphical representation of information that follows the same design principles as a map or any other visual. The only distinction is that it is related to the information on the map to which it is linked.

Making a well-designed legend will improve the overall gestalt of the map’s visual appeal.

A map legend provides the meanings of the shapes and colors used on a map. It can also explain other components of the map that do not show clearly in a scheme of symbols. Because maps are often produced so large, legends need to be readable and not interfere with the legibility of the map.

Content- The legend contains information that can be used to help comprehend the map. Legends usually include a title and depict the symbols with a brief explanation. The legend’s title does not have to include the term “legend”; in fact, it typically does not require a title at all.

When it is necessary (for example, to explain the significance of the choropleth map or other important information in the legend), the title becomes the most important part.

The legend’s symbology will include figures, shapes, lines, and colors. If the symbols on the map are self-explanatory, they do not need to be included in the legend. Whenever a legend has quantities of any kind, state the units explicitly on the legend.

Design- involves the overall appearance of the tale. The legend’s symbology must match the symbology on the map in terms of size, weight, color, and meaning. If the symbology is tough or slightly perplexing, a brief explanation of the symbol is required so that the map reader knows the meaning.

A visually appealing legend can be appealing, but it can also be distracting from the map. Be brief – not every symbol on the map needs to be included in the legend.

For example, in choropleth mapping, orientation is a key part of legend design, and there are many debates over the advantages and disadvantages of vertical versus horizontal legends.

The primary aim of both orientations is to show more or less of a specific value or phenomenon in an accurate and effective manner. Most legend layout conundrums are ultimately determined by map space.

Placement– The legend’s placement on the map is defined as placement. Some places are superior to others. Keep in mind that the mythology is employed to describe the major attraction, not as the main attraction itself.

The size should only be large enough for the reader to read. It is recommended to place the legend on the map in an open area.

For a political map of the world, for example, placing a legend over the Pacific Ocean rather than a country or state would provide a much cleaner picture.

Maps and charts utilize stylized shapes, symbols, and colors to represent things such as mountains, highways, and cities. The legend is a little box or table on the map that explains the meanings of the symbols. The legend may also provide a map scale to assist you in determining distances.

Depending on the objective of your drawing, you can use your own symbols and colors or rely on common sets of icons when creating a map and legend.

Legends are typically found near the bottom of a map or along the map’s margins, either outside of or within the map. If you place the legend within the map, make it stand out with a prominent border and be careful not to obscure crucial portions of the map.

You must first construct the map before you can make the legend. Maps are typically complex, and your challenge is to make yours as basic and clear as possible while not omitting any crucial information.

Most maps have the same types of components, such as:

When working in your graphics software, employ layers to divide and arrange the pieces. Before you begin working on the legend, finish the map.

Many software products, including Microsoft Excel, PowerPoint, and Word, as well as Google Sheets and others, have basic tools for making map legends.

You don’t have to reinvent the wheel with your map and legend.

In fact, adopting conventional symbols can help the user grasp your map. Highways and roads, for example, are commonly represented by lines of varying widths, depending on the size of the road, and are accompanied by interstate or route labels.

Blue is commonly used to represent water. Borders are denoted by dashed lines. An airport is represented by an airplane.

If you don’t already have the symbols you need in your font file, go online for a map font or a PDF that demonstrates the various map symbols.

Microsoft creates a map symbol font. The National Park Service provides map symbols that are free and in the public domain.

Styles vary, but a legend is often just a simple table with the symbols in one column and their meaning in the other. Keep the following advice in mind:

After inserting a legend into the layout, the legend properties can be accessed and edited. The following elements are editable by users: background, border, shadow, title, group layer name, headers, labels, and descriptions.

Within those elements, you can change the font’s size, spacing, or color, tweak the columns and frame, and change the border width and color, among other things.

You might be wondering what the distinction is between a map key and a map legend. The key clarifies the map’s meaning. The map legend typically includes not just the map key to the symbols, but also a wealth of other information:

Both expressions are now used interchangeably, however the map key is properly found in the map legend.

What Is a Map Legend?

The map legend explains the significance of symbols on a map. It is especially helpful when the map contains numerous operational or thematic levels. The legend element shows the legend of a map element added to your dashboard.

What are map legends used for?

All of the symbols (symbology) used in the map are listed in the map legend to help the reader understand what the polygons, lines, points, or grid cells represent.

Where is the legend of a map found?

Legends are typically found near the bottom of a map or along the maps outside boundaries, either outside of or within the map. If you’re going to place the legend within the map, make it stand out with a distinct border and be careful not to obscure crucial portions of the map.

Is a map key and legend the same?

These terms are frequently used interchangeably, however a map may include both a key and a legend. In some circumstances, the key offers a list of the symbols used on the map, while the legend includes the scale, abbreviations, and compass rose to show the cardinal directions.

How are map legends made?

Include a clear and legible legend at a visible location when producing a map. Map legends are typically placed in one of the map’s four corners so that they can be immediately referenced. To clearly differentiate the legend from the rest of the map, draw a box around it.

What is a map legend or key?

Why is it called a legend on a map?

Unsurprisingly, the origins of legend may be found in Latin. Legere translates as “to read.” Then, in the early 17th century, legends appeared in Old English, but in a special sense, the life story of a saint. On that saint’s day, such a legend was usually recounted aloud.

What is the purpose of a legend or key?

The legend or key’s aim is to provide you with the information you need to correctly interpret the symbols on the map.

What is the purpose of a map legend and scale?

A map legend is a description, explanation, or table of symbols placed on a map or chart to help with comprehension or interpretation. Map legends typically include information on the map scale as well.

Why are symbols important on a map?

Symbols are an essential part of a map. Symbols are useful because we cannot draw the actual shape of various features such as roads, trains, bridges, and so on in any map.

Symbols assist us in finding a location or gathering information about a location even if we do not speak the language of the region.

How important it is to know the legends in the map?

A map key, often known as a legend, is an essential component of a map. It explains what the symbols on the map imply and assists you to make sense of the map.

Maps are extremely useful tools that may be used to easily show things that would otherwise be difficult to understand.

What are the 3 types of map symbols?

How do you make use of a legend when reading a map?

The legend of the map, also known as the key of a map, defines the features that are depicted on that map. This is often accomplished by providing an example of a symbol found on a map, followed by a description of the phenomenon represented by that sign.

Should you use the word legend in your map?

The symbols or colors (including shades of gray and patterns) used on the map are defined by a legend. Legends are unnecessary on maps if the symbology is so common or basic that the reader can understand it. However, each marker or line type, weight, and pattern must be clearly defined.

What are map key symbols?

Symbols are little images that represent distinct features on a map. A sign is frequently drawn to resemble the thing it represents. A triangle form, for example, is commonly used to represent a mountain.

What is the difference between a legend and a key?

A caption, title, or brief explanation appended to an article, artwork, cartoon, or billboard is referred to as a legend. A key is a list of symbols that explain how they are used in a map, table, etc.

The legend is more general, whereas the key is more particular. Neither word implies anything about the text/placement. list’s

What is the difference between a map scale and a map legend?

The scale shows the ratio of a map distance to the actual distance in the real world. A legend describes all of the symbols on a map. Scale is indicated in map units (meters, feet, or degrees). A map should be as simple as feasible in explaining complex information.

What is GPS in Surveying? How Does It Work? GPS is a very accurate navigation technology that uses satellite…